(Note: The following post describes details from a previous trip, NOT a current trip.)

My long walk home has ruined my plans to get an early start on the day and tick off some of the places on my list.

I eventually get myself in order, and head down to the tourist information office.

After tolerating a long line to get a museum pass, followed by a(n awkward) bite to eat at a nearby bagel place, my first stop is the Musée de l’Orangerie, which houses eight of Monet’s “Waterlilies” paintings in two rooms specially designed to best view the works. 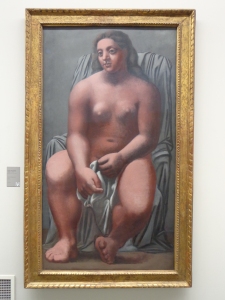 To my recollection, I’m sure I’ve only seen reproductions of Monet’s works, so I’m surprised at how large they are.

I love the variety of colours used, and I don’t feel rushed as I study each work from one end to another.

There’s also a lower level, which showcases many other paints from artists varying from  Cézanne to Picasso. (I’m sure technically I’m not supposed to, but … *coughs nervously*)

After, I hop on the métro and head over to the Panthéon.

The architecture of the lobby and main level itself – from floor to dome – is a sight to behold. 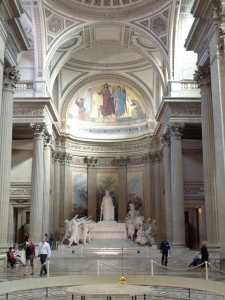 Also neat to see? Foucault’s Pendulum. Or, rather, an exact copy of the original, which has been swinging permanently in the Panthéon for 17 years. I’ve heard of the pendulum, but have never seen one up close. Nor has it ever occurred to me that it would be this big.

I head into the crypt of the Panthéon, to visit the final resting places of a number of France’s most well-known names.

I visit the corner that Voltaire and Jean-Jacques Rousseau share; I peek in on Louis Braille and Marie Curie (in different sections, of course).

And the hallways – despite the echoes of the voices of yammering tourists (and shushing by staff) – are immaculate and sleek (and this is me describing a crypt).

Outside the Panthéon, I need to kill time before I go to meet Darlene for drinks. And I’m kind of hungry. So in a moment of weakness, I duck into a McDonald’s. I usually try to stay away from the familiar (or ubitquitous) when I travel. But today, I think I’m at a breaking point. I’m craving grease and batter.

Heading out, I ride the métro to Saint-Michel station, but get a bit lost (surprised?), then dawdle in Shakespeare & Company, so I’m late when it’s time to meet Darlene.

When I finally find her, it turns out she’s brought her roommate Laurent with her. They take me right into the heart of the Saint-Germain-des-Prés neighbourhood. Many bar and restaurant terraces are already full to the brim with happy-hour-goers, drinking and smoking, by the time we get there.

So now, we’re waffling between finding indoor seats at one of the French restaurants surrounding us, or trying to find the Canadian bar (which I think is called the Great Canadian Pub – someone can correct me if I’m wrong) where ex-pats are known to hang out.

We pick a French restaurant and hastily file inside. Our server’s super-friendly and he provides us with popcorn and olives to accompany our drinks.

Laurent’s really friendly. Originally from the north of France (not sure if his easygoing nature’s a direct product of being from outside Paris), he’s working as – of all things – a spam programmer, but is on the hunt for another, less questionable job.

We don’t hang out too late, as Darlene has to get back to working on her freelance project.

I return to my neighbourhood and grab a bite at one of the local restaurants. Given my late night on Sunday, I opt to turn in comparatively early.

Tomorrow, I aim to make up for a bit of lost time.