Following Auschwitz, our group returns to Krakow to make the most of the time we have left.

One thing about groups and sightseeing: as much as I enjoyed the company of the people I was with on this tour, it sometimes seemed like decisions on what things to do and see, took a dog’s age.

In the end, some of the group decides to make a break for the castle before it closes for the evening. The group I’m with – Angela, Lauren, Randy, Kelly (a Kiwi) and myself – head in the direction of town (and hopefully food and shade). The idea is also to head over to the Jewish Quarter (Kazimierz) to book reservations at this restaurant our tour guide Carla told us about.

Much like Prague, the sun is beating down. Although it doesn’t really feel as humid, I can feel the sweat start to form under my white tunic.

Kelly and I decide not to follow the others for a stand-up lunch and souvenir hunting, opting instead to try and find a sit-down place, and Kelly volunteers to go over to the restaurant in the Jewish Quarter afterwards to book a reservation.

We wander from street to street, with nothing popping out at us. We even ask a man – who we assume to be a local – if he could suggest a place to try. Although I don’t think it was the place he has in mind, we eventually find a quiet, empty indoor lounge-type place and just completely chill out for about an hour. So nice.

After lunch, we wander through the streets and

end up in the Jewish Quarter, where we find the restaurant. While in the vicinity, we stop by a Jewish synagogue and the adjoining cemetery. On the way back, we run into Will, one of our tour-mates, who’s just chillin’ on a park bench.

We return to Rynek Główny Square and walk right into:

(b) A smallish ceremony right in front of St. Mary’s Basilica, marking the 64th anniversary of the Warsaw Uprising, complete with huge-ass tank, soldiers and choir singing patriotic songs.

The second thing would prove to later be a bit of an impediment when trying to round people up for dinner, as it obstructs our view. So in the end, the group of 20 we hope will go to the restaurant shrinks to a posse of eight.

Bah, no matter. The group of us that does go to the restaurant has a grand time. The waiter is very cute (in an entertaining way) and make us laugh throughout our meal. The tip we leave for him at the end of the meal is, I think, much deserved. (Of course, he loves us too, for obvious reasons.)

I have a matzo ball soup, followed by some carp, which is really good – especially since it’s the first time in about five days I’m eating something that’s not a meat or sausage product. A number of people order beet-root soup, which ends up tasting way better than the description suggests. It also makes me kind of regret ordering the matzo ball soup.

Not much else happens after dinner, other than me finally finding an Internet cafe and phoning home to put to rest whatever concerns my parents (by whom I mean my mother) may have, and my other tour-mates getting some ice cream.

It’s at this juncture that Kelly, Lauren, Angela and I elect to grab the bus and head back to the hotel.

We walk all the way to the shopping complex, as directed on the Krakow city printout Carla gave us earlier to find our way back. We look on all the signs at the big bus stop sitting in the middle of the road. None match the bus we need to take.

Then we walk past the shopping complex, waaaay down to the far end to check. We end up at the back of what we guess is a metro station – and we meet a huge green dumpster. We quickly double back.

Heading past the shopping complex, Kelly (who twisted an ankle a few days prior, had developed blisters from all the walking, and is now limping) spots the bus in question, not pulling up to the bus stop island in the middle of the road, but on a side street, waaay on the other side of the road – from where we originally crossed.

I dunno how she does it, but Kelly manages to make the mad limp across the road, and gets the bus in time for us to pile on.

The driver also doesn’t speak English. So how we make it to our stop is beyond us.

But we manage to get off close to the hotel. Kind of. To get to the hotel – which is by a sizeable motorway – we have to walk up a dodgy pedestrian stairway with glass EVERYWHERE. (Keep in mind it’s now about 11 p.m. at night, and dark.) Then we basically cross the bridge (which thankfully has a sidewalk), and then back to the hotel.

I’m pretty relieved the rest of my evening is spent having an evening drink with some of my tour-mates on the Holiday Inn patio, ’cause I don’t think I can take any more excitement.

Besides, tomorrow will be a new day … in a new city. 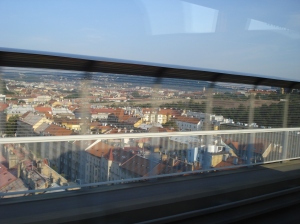 It’s a tad rough this morning.

I get about 3 or 4 hours sleep after my late night out, and I’m up early to hurriedly pack my things. I’m not feeling so hot – but that’s my own fault.

Following breakfast, we leave the hotel just after 7:30 a.m. so our bus driver Anthony can get a leg up on the inter-country traffic. Our drive to Krakow will be approximately eight hours, with about three rest stops along the way.

I think I manage to get a half-hour nap before the bus makes its first stop, about 15 minutes in length. Then, back onto the bus.

Once back on the road, trip leader Carla pops in a movie related to our excursion to Auschwitz (happening the following day) – “Schindler’s List.” It’s the first time I actually have seen the movie, and I find it extremely really hard to watch. (Really, does anyone find this movie easy to watch? Probably not.)

Anthony drops us off in the old part of town, where Carla takes us on a brief orientation tour outside the outer perimeter of Wawel Castle. We then go into the old part of town, stopping briefly at the bright yellow former residence of Pope John Paul II when he was bishop of Krakow. (I spot the photo exhibition of Benedict II, which may or may not have been coincidentally placed in the building directly across the way.)

We wind our way through the streets before ending up in the Rynek Główny (or Main Market) Square, close to St. Mary’s Basilica.

After tooling around for a bit, we finally head to the hotel for a low-key evening. It’s a bit out of the way, but that doesn’t matter at all – it’s a brand-new Express by Holiday Inn.

The room is bigger, and there’s air-con. The only slight set-back is when Lauren goes to use the shower, only to discover the drain is clogged. Angela goes to reception and asks that houskeeping come and fix the problem. It isn’t all in vain – she gets to talk to a cute reception desk clerk.

Meanwhile, I attempt to call home for the first time in about three days using the free phone cards Carla gives all the travellers when they arrive for the tour. I try the pay phones in the lobby. Doesn’t work. I try using the phone in our room – several times. No dice.

I go to reception and explain my predicament to another (cute!) desk clerk, who tries the card for himself and tells me the card is no good. Oh well. Here’s hoping I can find an Internet cafe the next time we’re in town.

Our group sticks around the hotel for the night – we all have to rest up for a very important excursion which, I can now say, everyone should take at least once in their lifetime.