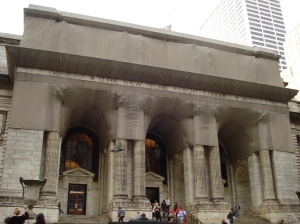 It’s P’s birthday. And it’s a late start for us. There’s a heavy rain shower early in the morning, which causes us to hunker down in our beds for longer than usual.

First stop – no breakfast – is the New York Public Library – heaven for librarians and any book nerds worth their salt.

After the obligatory pictures of one of the lions and the exterior, P and I check out the interior. Despite the beautifully designed building itself, there are, surprisingly, no stacks of books – unless you count the volumes upon volumes of catalogues, with countless pages of photocopies of cue cards, containing information about books.

We check out a couple of the reading and research rooms. P – who is actually a librarian – figures that, to get a book, you have to make a request to one of the librarians at the main desk, who then puts in the request to have said book retrieved.

From the library, we take the subway down to Whitehall Terminal, and board the Staten Island ferry so we can see the Statue of Liberty.

We shuffle with the crowds, making our way onto the boat and then towards the front so we’ll have a good view. 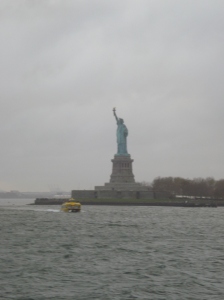 through the water. The air’s crisp and cold. Seagulls bob along the water’s surface and harness the wind to glide above the boat, at times appearing suspended in flight.

And we then we see Lady Liberty. She’s smaller than we expect. Then again, we’re a bit farther away from her than we thought we’d be. But for a free ride, it’s good enough. Making the trip back, we get a better frontal view of the statue, and can just make out the torch, which is “on”.

Off the boat, we walk over to Ground Zero. There’s not much to see, unfortunately – huge board-and-wire-gate fences block the hole from public view, and there’s at least one crane from what I can see, which means construction on something has started.

We stop at a nearby deli for our first – and only – meal of the day. As it would turn out later on, this is a small blessing in disguise.

Next stop: Century 21, the store several people have told me I HAVE to go to. The exterior’s already got lights draped the size of the building, so it looks like a big, glittery Christmas present.

The inside is friggin’ enormous. Just floors and floors of … stuff. P is done after about 45 minutes of looking. (Unbeknownst to us, she temporarily doesn’t feel so hot, but we don’t know this until much later.) I’m just looking and looking. I go down to the basement to look for shoes. I’m a bit overwhelmed, and unsure of the selection, so I re-emerge after about 40 minutes or so. C is almost ready to throw into the towel. But partway through, she’s gets the trick to navigating this unwieldy store: you have to be prepared to dig, and dig to find that choice buy.

At one point, we all get second winds, find some things to try on, and get down to business. In the end, none of the things we take into the dressing rooms are truly worth getting. But on our way back through the trench coats and winter jackets, I come across a really nice pea coat, which I end up getting for half-price.

Unfortunately, all the time at Century 21 thwarts our original plan of heading up to Harlem for soul food. So we decide to head back to the apartment and change before going out to get changed for P’s birthday. We’ve decided to go to Brooklyn, to this place P read about online, Black Betty.

Drinking at the apartment beforehand, I’m imbibing slower than the others – I’m kind of tired, plus, I want to pace myself. (Wait for the irony of this statement, if it is indeed ironic.)

We head out and after a few attempts, including a cabbie that outright drives off when we tell him where we’re headed, we land a cab.

Because of the traffic, it takes FOREVER. We almost give up and tell the taxi driver to turn around, but he says the bridge takes no time to cross, once we get to it.

How to describe the place? Um … dive-y?

We enter, and the place is packed with young’uns, drinkin’, dancin’, bumpin’ and grindin’. There’s even a Hasidic Jew getting his dance on.

We order drinks from one of the bartenders. As we wait, we spot one of the other bartenders wearing an old-school Saskatchewan t-shirt (which I’m pretty sure she’s wearing “for the irony” because she probably has NO CLUE where Saskatchewan is).

About half an hour in, the night starts to blur. As far as I remember, the rum and coke in the full-sized plastic cup becomes a Red Stripe (!) … which then morphs into a mixed drink C gives me … which then gets placed on a table, never to be finished.

At some point, a speaker falls off its perch above us and nails P in the foot. NOT COOL. She helps put the thing out of harm’s way, which pleases some of the other drunk patrons who didn’t move an inch when the thing originally fell.

Things for me take a turn for the worse. P comes up to me, asking for my help in shaking her loose some young squirt who’s latched onto her … and I sit down because I suddenly don’t feel hot. AT ALL.

I feel it’s my duty at this juncture to impart some words of wisdom to my fellow drinking lightweights.

No, I’m not going to give a lecture about the danger of mixing drinks. Or the virtue of eating enough to absorb the booze. But I WILL say three words in regards to emptying the contents of one’s stomach under a table:

Learn from my mistake and NEVER do it.

Back to my story: I seriously cannot for the life of me remember the last time I did this. I’m too OLD to be doing this. It’s a wonder I don’t retch up a lung.

My friends and I – to my utmost relief – finally leave Black Betty behind around 4 a.m.

It’s unfortunate that my last memory of the Brooklyn Bridge early this rainy morning is anything but pleasant.