Have we approached deep winter yet? Because it sure feels like it.

As I type this, the temperature in Toronto is hovering somewhere around minus seven degrees Celsius, with a wind chill of -17 … which isn’t great, but compared to recent weeks is, sadly, not horrid.

Winters here are typically milder than other parts of the country. But it’s been a roller-coaster season (everywhere) so far. When we haven’t had cold snaps, we’ve had snow globe-type flurries to keep snowplows (and people who have driveways to shovel) occupied.

My mom’s shuttered herself in her apartment, and she’s going stir-crazy.

Know who’s really had it up to here? Commuters battling traffic and slow transit, bundled like sausage rolls, just trying to get to work on time. Don’t even start with them.

When I’m not sweating as I’m bent over in my outerwear, trying to lace up my boots, I’m slipping and stumbling along snow-covered sidewalks, the cold harsh wind trying its best to sting my legs, while gnawing at my exposed face. 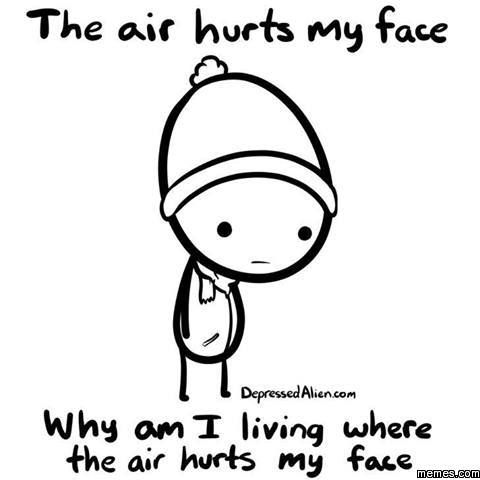 (Dude*,  you have no idea how relatable this comic is right now — thank you.)

I’m constantly tired. Part of it’s my own doing. But I attribute the other part to the weather.

And I constantly. Feel. Dry. Everywhere.

If it’s not my lips or mouth, it’s my nose. And if it’s not any of the other holes in or on my face, it’s the skin on the rest of my body, which I constantly have to stop from picking or scratching off.

I’m using whatever lotions, balms, and homemade body butters are within reach, and am trying to drink a reasonable amount of water. But this dryness is relentless.

The only thing drier than me and my wrists (my latest fashion accessory: dermatitis bracelets) might be the Sahara Desert.

I fully acknowledge (and can appreciate) that there are folks who love — and live for — winter. Ice-skating, playing hockey, skiing, snowboarding, jogging in the mornings or evenings – any activity that invigorates them, gets that brisk Arctic air into their lungs.

I … am not one of those people.

I simply do not care that I’m Canadian and should be used to it. Every winter that passes, is one more that saps my energy. I’m. Spent.

For the past couple of years, I did have one (not cheap) coping mechanism.

For at least the first two months of winter, I’d pull on two (or five) layers of clothes and do my best to soldier through the crisp cold weather, doing my best to manoeuvre around coughs, runny noses, seasonal affective disorder and the lack of vitamin D.

But I’d make sure that at some point – in February or March, when I’d had enough – I’d book a trip, board a flight and get my backside to a warmer country. My brain would get a bit of a rest, my skin would clear up, and I’d have a good mood that would carry me for a few weeks.

This year, there’s no winter break travel money. So the warmest I’m going to be is under the covers or standing next to the baseboard heaters in my apartment.

Yes, I realize that having the money to travel is a privilege in itself. But as a personal philosophy, I never put myself into debt for the sake of travel (or anything, period). If I can’t afford to pay for it, I start saving.

So unless I suddenly trip over $3000, I need to find a bunch of ways to cope until the weather gets warmer.

Perhaps this is the winter I find solace in the art gallery or the museum … or in a lot of movie theatres … because at the rate I’m going, I’m going to be a wreck by April.

So readers who live in cold countries: if you’re not the outdoorsy type, what do you do to cope with winter? How do you keep from not going stir-crazy?

And for those whose moisturized skin is defying the cold: what are your secret (paraben-free) weapons?

Let me know in the comments!

“Bizarre last minute question,” began the message on my Blackberry, “but ru (sic) busy tonight? I have an invite to a spa launch + wondered if u would like to join me?”

I gazed bleary-eyed at the screen, reading and re-reading the note, and groaning inwardly.

I’d just awoken from a long nap about three minutes earlier. So processing the impromptu invite from my friend (author of Play Anon) – and the personal logistics to make this happen – took a bit longer than usual.

I asked her about the time and dress code. She responded … and asked me if I’d be ready for 6 p.m.

That’s less than 45 minutes from now, I thought. Knowing how slow I move, especially after sleeping, I didn’t think I could get ready that fast. Plus, I didn’t think I was in the right frame of mind to be around other people.

I wrote her back, asking if I could I pass on the invite.

Reflecting upon it today, I’m glad she was. Besides getting out of the house, I spent some time catching up with my friend. And, that wasn’t all!

The spa we went to was launching a new service: foot massages on Friday, Saturday and Sunday evenings. On the way home from work with tired feet? Or, getting ready for a night on the town? Get a foot massage.

Besides meeting some people, sipping a little prosecco and nibbling on some very tasty appetizers, each person who attended the event got a free, 20-minute foot massage … which was absolutely fantastic!

I returned home later that evening with relaxed feet, thank-you cookie in hand (see above) and in a happier state than when I left. I inwardly chided myself for initially resisting the invitation. I honestly can’t imagine what my evening would have been like, had I stubbornly dug in my heels and refused my friend’s invitation.

And that has me thinking about how I should make the most of my summer.

Unlike previous years, I’m not taking a vacation anywhere. Not out of town, province or country. I’m not even really taking any vacation days – I can actually count the number on one hand (minus fractions). I’ll probably be working every weekend the entire summer.

With the weather well into double digits, the battle to balance my social life has already become more of a challenge. Because of my upside-down schedule, I’m socializing on “school nights”, when I should be sleeping, because when will I see my friends? And I don’t fully enjoy myself because I’m constantly watching the time.

Conversely, on my days off, I live almost hermit-like, because I know very few people who also have weekdays off. So most of it ends up being spent indoors, looking at other friends’ Facebook pictures of that awesome deck party they went to the weekend I was working. And then it makes me resentful, so by the time I return to work, I’ve already worked up a sulky mood to last the next four days.

So this month, my goal is to rectify this. I need to make an effort to be a little less of a sucky baby and find those friends in  similar work situations – and make the most of my “weekend”.

Go for brunch more often. Go shopping. Take a long walk somewhere. Do something I don’t normally do. Hopefully find friends who have dinner parties and deck hangouts on Monday or Tuesday nights. And just do fun summer stuff when people are stuck in their office cubicles, whining on their Facebook statuses about how they wished it was Friday.

And, while I’m at it, I need to get out of town at least once this season.

If I can do any – or all – of this, then perhaps I can successfully cling to my sanity for the long – and hopefully hot – work days of summer that lie ahead.

Although problems seem to be thrust on us by an unfair destiny, they are all made to meausre as a result of our attitudes. We choose the cloth, cut and colour of our garments. If you don’t like what you’re wearing, change the material.

I’d been at work a little over a week,  and I could already feel the old surliness creeping in.

Not that I consider my horoscope to be a source of absolute truth, but the message that day seemed pretty apt.

Outside of my personal situation, the environment at my workplace hasn’t been the greatest lately. People have been losing jobs. A handful are choosing to take retirement packages. Most are in limbo, waiting to see if their names are on the list of casualties, or be spared in some way.

Meanwhile, I’ve been continuing to struggle between being grateful for working, period, and feeling even more cemented in a rut than ever before.

On top of which, the one thing I thought would be an avenue out of my rut has been roadblocked – for at least the next six months, anyway (if one of my friends – who knows the area I want to work in – is to be believed).

So over the last few weeks, I’ve been slowly trying to change my attitude and make the most of my job. ‘Cause let’s face it: where I currently am is, for now, not in danger of disappearing. So I might as well try to keep myself busy instead of sitting like a bored little bump on a log.

Hopefully this updated “pattern” can last me at least through the next several months, or until the right material comes along to make a whole new garment.