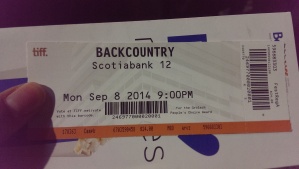 So … I was supposed to write this on Thursday, but life got in the way. My apologies for lying to y’all … again.

Time to catch up!

Full disclosure: I HAAATE scary movies. I do about as well as a five-year-old girl when it comes to these things. (Don’t believe me? Ask my mom about her memories of me, the Incredible Hulk TV series, and my relationship with our front hallway coat closet.)

So why on earth would I pay money to see this (and potentially soil myself)?

First, and foremost (and another full disclosure): I know and have met the director in person, through friends. He’s good people, and fiercely dedicated to honing his craft. I saw a short film he directed several years ago, and remember him speaking at the time about his next project — a movie, much like Open Water, but in the woods.

So imagine my surprise when – scanning through online descriptions and picking movies at random – I saw the listing for his movie.

As IF there was any question about whether I’d see it.

But acquaintanceship aside, I try to support Canadian films when I have the chance.

I can only imagine how tough it is to make movies of any kind, anywhere, period. But – and I’m basing this on what I’ve heard about the film industry here, so correct me if I’m wrong – it’s not the easiest to do in (English-speaking) Canada. So when an idea is brought to life and it’s something I’m interested in seeing, I’ll get my backside down to the theatre.

The film centres around a couple, Jenn (Missy Peregrym) and Alex (Jeff Roop), who decide to get off the grid and go on a weekend camping trip – a getaway that has promising beginnings. But the mood of the trip changes when they have a run-in with a mysterious man (Eric Balfour) near their campsite, with an Irish accent and a strange story to match.

The encounter causes a bit of tension between Jenn and Alex. But when they take a detour while hiking and end up lost, things take a terrifying turn.

For his first feature-length film, I think it was a solid effort on MacDonald’s part. Shot in northern Ontario (near North Bay), the film’s location is beautiful, the editing’s great, and the plot pretty straightforward.

And while I did spend part of the movie peering through my fingers, keep in mind what I said earlier – I’m a big suck. People looking for super-scary movies won’t find this as scary as me. There is some gore, but this type of horror is more psychological (which I think is much more effective).

Also? I don’t think I’ll be going camping anytime in the near future.

If this movie ends up being released anywhere, check it out and see what you think — and please support Canadian cinema!