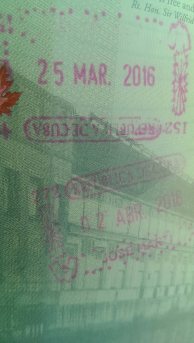 Sorry for the lack of posts. But this time, I have a reeeally good reason.

When I originally wrote this post in January, I had said I’d like to visit. To be honest, though? The idea was already firmly wedged in my mind. It wasn’t until the morning of my birthday that I decided to stop thinking and start doing.

And I had to move fast.

So many other people had the same idea — to get there before things changed drastically — that nearly all the dates for tours I was interested in, were already booked.

I snagged the very last spot on a G Adventures tour that started over Easter long weekend (a fact I didn’t realize until I booked the trip). It was a bit more than I wanted to spend, but I thought it’d be worth it.

I only returned to Toronto a few days ago, so I’m re-adjusting to the god-awful weather I thought would’ve been gone by now (what the backside, April), and sort out the reflections and observations I didn’t have the chance to write down along the way.

But when I do, I’ll be blogging like a fiend. Hopefully I can entertain, inform and perhaps encourage you to consider adding Cuba to your travel plans, if you haven’t already.

So keep watching this space — I hope to have the first installment up here within the next week.