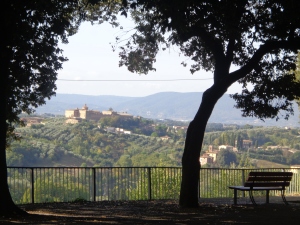 (Note: The following post describes details from a previous trip, NOT a current trip.)

One last stop before we head for Rome is the Tuscan town of Siena.

Outside the town gates, we pile out, and Franco takes us on a “short” tour/orientation walk.

According to Franco, there’s this horse race – the Palio di Siena – which takes place twice a year, in July and August. (Rick Steves has written about it here.)

And from what he tells us, Siena’s streets are covered with sand (or dirt, if you believe Wikipedia), all for the purpose of a race that lasts roughly 90 seconds.

NINETY. SECONDS. Think about that.

Here’s a visual of July’s race:

We pass by a building we all assume is a church. Because after all the churches we’ve seen, why wouldn’t it be?

We stroll past various buildings in warm, muted shades of yellow, orange and terracotta red.

Some stores and other doorways have sculpted animals – like snails – hanging overhead.

Eventually, we arrive at the main square (the Piazza del Campo), home to the Palazzo Pubblico (town hall).

The piazza slopes downwards, dipping in its  centre like a shallow basin.

There’s a huge tower – the Torre del Mangia – with a clock on the other side of the square from us.

The sun is slowly moving overhead, so at this point in the day, half of the square’s in the shade.

Franco herds us back up the stairs, away from the square, back onto one of the streets encircling the square … passing little shrines to the Virgin Mary, stores with pastries displayed or cured meats hanging in the windows, and doors with all shapes and sizes of knockers.

Franco returns us to the square and cuts us look for about 90 minutes.

Mom and I wander about, get something to eat, then browse. I return to one of the stores we passed earlier and pick up souvenirs for a couple of friends.

Time’s up. We’ve been told we have to be out of Siena by a specific time, because of a local law which reduces traffic for the streams of school kids leaving classes for the day.

So we’re rounded up and taken to a gate on the other side of the square, where we wait. And wait. The bus appears … eventually.

We arrive on the outskirts of Rome in the early evening, at our final hotel.

We get about an hour and a half to catch our collective breaths in our tiny, minimalist hotel rooms, then freshen up and change for our goodbye dinner at a downtown restaurant.

Before departing, we meet just outside the front entrance for a group picture, then climb onto the bus, and Pierluigi drives us downtown, dropping us off around the corner from our restaurant, called Mangrovia.

The room our group’s in, is a wee bit chilly – especially for my mom, still trying fight off an imminent cold. But it’s nice, considering.

We’re serenaded at intervals by two musicians while we dine. But the real entertainment comes in the form of our two waiters, who roll their r’s and pretend to flirt with some of the female tour members.

Then, they kick the comedy up a notch.

At first, the one waiter serving our group singles out some of the older women, like Else from Vancouver, and Vi from Halifax. He presents them each with roses, then plants (partially pantomimed) kisses up their arms, into the crooks of their necks and on their cheeks.

And – for good measure – the momentary embarrassment concludes when he pinches their rumps.

This happens early on in our meals (during the antipasto and salads), am I’m finding this all highly entertaining.

But things take a turn when the pasta course is served.

Everyone except for me and fellow tour-mate Tim (from Saint John, New Brunswick) get their pasta plates right away.

I brush it off; I figure perhaps the waiters’ hands are full and our plates are coming.

Well, they come, all right.

The waiter comes up behind me and lowers a rose into my sight line.

He starts planting kisses up my arm, warbling away in Italian, rolling his r’s in muffled tones, lands a kiss on my neck – making me squirm uncomfortably – and then *YIP!* gives me a good, hearty pinch on the meaty bit where my hip and backside meet.

My goal of visiting Italy without getting goosed … FOILED by the Kissing Waiter of Mangrovia Restaurant.

Sitting just behind me, my own mother and some of the Aussies are having a field day, and mercilessly rib me about it for the next five minutes. But I suppose it could be worse. The waiter makes Tim wear a blonde wig. (But there’s no bum-pinching [the Kissing Waiter has LIMITS] and he’s an extremely good sport about it.)

The meal’s very filling – and I keep getting roses from whats-his-face (I can’t tell if they’re still trying to get a rise out of me, genuinely having fun with me, or taking pity) – and ends with possibly the biggest gelato mountain I’ve ever seen, which I can’t even finish.

We eventually leave (but not without my mom and I getting overzealous pecks on cheeks from our restaurant Romeo), climbing onto the bus, which Franco pumps full of ’70s and ’80s tunes on the way back to the hotel.

The rest of the evening is honestly a blur. I remember most people retire to their rooms to pack (as a number of them have to leave extremely early the next morning).

I vaguely remember getting some of my things ready, but then returning to the hotel lobby to hang out one last time with Dallas, Randy (who’s losing his voice), Selene, Paul, Crystal and Louise.

After a handful of drinks – and once the bottle of blue wine Selene and Paul has brought has been drained – the group shrinks.

Eventually I wish the stragglers a safe trip and toddle off to bed.

Travelling with my mom to Italy has been at times challenging, but fun. I’m glad I got a chance to share the experience with her.

Would I ever do it again? Perhaps. But it might depend on her.

Maybe the next trip together won’t be overseas. Maybe it’ll be for a shorter period of time, and at a slightly slower pace.

We’ll see what the future holds.