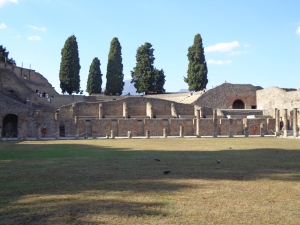 Our tour bus arrives outside the ancient city of Pompeii around mid-afternoon.

This is one of the things I’m looking forward to seeing. Ancient-ruin-anything pleases my inner geek.

Once inside the front gates, we meet our next local guide Vincenzo (or Enzo, as he likes to be called). He takes our group down a tree-lined path and into the sun-baked ruins of part of the old city.

We’re told it’s impossible to see the entire old city in one day; for our part of the trip, we’ll see roughly a third of the ruins (which lasts about two hours).

Enzo’s actually third-generation resident of the modern-day town of Pompeii, so he’s as chock-a-block full of information as he is entertaining when he describes what life in ancient times would have been like.

He takes us to see an ancient ampthitheatre, and explains practical purposes for things, such as the way the roads were paved, and how merchants set up shops.

He shows us an ancient “fast-food” restaurant, as well as how to determine whether the ruins of a home belonged to someone of a certain class.

We take respite from the sun in an old structure, and take a look of a couple of figures in plaster – said to be real people, frozen in the positions in which they died. I’m not sure what’s more surreal – that, or seeing them under glass, themselves relics from an ancient event.

From there, Enzo takes us to a section of town that housed a brothel, explaining how prostitutes would bring in business.

(In the street not too far away from the brothel, there’s a drawing on of of the stones that one could describe as an ancient form of “GPS”, so to speak.)

Near the end of our tour, we pass through a very large courtyard.

At one end is a building housing all sorts of recovered artifacts – urns, vessels, pieces of moulding, and again, figures frozen in plaster and time.

One particular person is crouching – likely under something to protect himself, but sadly, his gesture was in vain.

It’s been an interesting look around Pompeii. But after a post-tour gelato, it’s time to pile back onto the bus to get to the next leg of our destination.