Our morning routine is still slow, even if we’re up earlier than on previous days.

Our first point of order: book our excursions.

On Friday, we’ll go to a nearby island for a three-hour session swimming with dolphins. (Or, more accurately, Christine and Jen will swim with the dolphins; I’ll be observing.)

Then on Monday, we’ll take a powerboat trip approximately an hour south to one of the smaller islands – or cays – for an afternoon of sun, sand, snorkeling, sharks and stingrays. 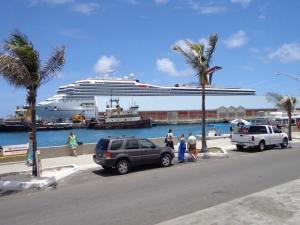 Later in the morning, we catch the bus into downtown Nassau, to take a peek around and perhaps do some shopping. It’s cruise ship central, so we see a LOT of tourists crowding the sidewalks.

We start on a random street, walking up one side, then over to another. We visit Nassau’s Straw Market, past many women hawking their wares, trying to get our attention to buy one of their many tchotchkes.

We pop in and out of shop after shop, looking at liquor, t-shirts, sarongs, dresses and other knick-knacks for possible souvenirs to bring home for friends and family.

In one shop, Christine and Jen purchase some hot pepper sauce, while I decide on some mango and hibiscus jelly which – according to the label – is supposed to be Bahamian-made. 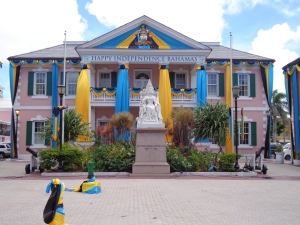 As we pass through the middle of town, we notice that various displays and patriotically-coloured bunting is still hanging from the day before – it gives the area an almost perpetually festive feel.

We stop for lunch after 2 p.m., then do another partial circuit, where we stop at a liquor store so Jen can load up on Bahamian rum.

We return to the place we were dropped off, then climb onto a bus … which takes FOREVER to leave, because the driver is trying to fill every seat.

When we DO finally depart the town centre, we don’t get very far. We hit a single-lane traffic jam. Apparently there’s an accident up ahead. (And – as with anyplace else on earth – likely drivers rubbernecking to check out said accident.)

One of the local passengers calls her friend to say she’ll be late, then passes the time by singing along to the tunes the driver is playing. Another passenger – wedged in next to me – sucks her teeth in exasperation. Woman #2 leans forward to talk to Woman # 1, probably to commiserate about the snail’s pace at which the bus is going.

Woman #1 (presumably a cook – she’s wearing a white smock with a matching white cap, holding her cell phone in one hand, and a julienne peeler and a straw in the other), points out that she herself is running late, and has errands to run.

“No use in worryin’, ” she replies. “Yuh reach when yuh reach.” I couldn’t agree more.

As we creep and, eventually, drive closer, a song called “Bus Driver” starts playing over the speakers. The song and lyrics, to me, are fitting.

Later in the day, after we’ve unwound (and I’ve taken a nap), we head down the street to a local italian restaurant, called Capriccio.

We start with some mussels in a spicy, tasty arrabbiata sauce. For dinner, Christine and Jen enjoy some seafood pasta with cream sauce, while I try some pan-fried grouper … with ACTUAL VEGETABLES (which I haven’t had for at least several days, and am beyond happy to see on my plate).

After dinner, it’s back to the “villa”, where we drink, dance around to music from our iPods and generally goof off.

It’s almost 1:30 a.m. when my head hits the pillow for a long, gin-stained slumber … filled with dreams of weird movie sequences involving mysteries to be solved, and King Kong pulling down the Eiffel Tower, against a brilliant sunset.