Hey, kiddies. It’s been a while.

Can’t believe it’s June already! Hopefully this hot, new month will spawn some creativity that was lacking in May.

In the meantime, here are some my most recent reads: 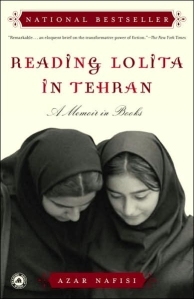 I’d heard good things about this memoir by Azar Nafisi, in which she recollects her life as a young university English professor during the Revolution in Iran.

The book certainly opened my eyes – at least, to the way she saw the events unfold around her. I liked how she paired the works by her favourite authors with anecdotes from the rapidly changing world around her – a life in which the very love for her livelihood and for English literature was threatened. I learned how it was her love of books that kept her sane.

Come to think of it, this book reinforces for me – as a lifelong reader – how astounding the power of words can be,  how books play such a huge role in regimes and periods of oppression … and how the written word seems like a threat to those who try to control.

In any case, I encourage you to give this a try, if you haven’t already.

I didn’t actually plan on reading this one anytime soon, especially so soon after reading Midnight’s Children, which took me a dog’s age to finish. And after feeling disappointed, the last thing I wanted was another long, winding yarn.

But I took a chance after an impr0mptu visit to the library … and I’m so glad I did YES! THIS is what I’m talkin’ ’bout!

The White Tiger takes on the form of a very long letter to the Chinese president, from a self-made entrepreneur in Bangalore. But it’s not too long before we learn the secrets of the protagonist’s so-called success.

The book is dark, with punches of humour to match. And life portrayed in the book is rough and tough from start to finish. Is it realistic? I can only place my trust in the author that it is, to some degree.

That aside, once I started reading, I made fairly quick work of devouring The White Tiger. I highly recommend it.

I was drawn to this book, not by anything I’d read – because I hadn’t – but simply by the cover. Who was Oscar Wao? What made his life so brief?

It literally was months before I got my grubby hands on Oscar Wao. And all I can say is, well, wow.

If you like books written from a nerd’s perspective, in a sci-fi/fanboy style, complete with footnotes about Dominican history and generous helpings of Spanglish, this might be a book for you.

Oscar Wao is a thick chronicle of the de Leons,  dyfunctional Dominican-Americans with a rough family past. But a huge portion of the book is, obviously, dedicated to the title character – an obese young man with both a desire to make it as a fantasy writer … and no game whatsoever, when it comes to the opposite sex. The novel isn’t narrated by Oscar, but mostly by Yunior, a family “friend”, and some narration from other family members who give scarred flesh and bone to the family’s backstory.

Some people may not like the footnotes at the bottom of a number of the pages. But I actually found them helpful and loved the sharp style in which they were written.

But, still. Consider giving this book a try before either putting the book down or ploughing right through it. And I hope that if you do, that you’ll end up doing the latter.

The Peep Diaries: How We’re Learning to Love Watching Ourselves and Our Neighbors, Hal Niedzviecki

It’s perhaps coincidental – or uncannily relevant – that I’d just happened to complete my read of The Peep Diaries last week, amidst all this talk about Quit Facebook Day to protest the site’s new rules on privacy settings and whatnot.

In his tome, Niedzviecki explores the realm of Peep culture – think of it as The New Voyeurism in the age of Facebook, Twitter and reality TV, amongst other things.

Through his conversations with YouTubers, bloggers, reality TV show participants, and even performing his own experiments, Niedzviecki tries to wrap his head around why people are obsessed with seeing, as well as being seen by, others. He ponders the different ways in which people watch others, whether it’s relevant, and and whether sometimes it simply crosses the line when it comes to issues of privacy … if lines can still be drawn.

Everyone’s got their own perspective on the matter, so that might colour what you think of the subject matter in Niedzviecki’s book. But if you’re like me – or the millions of other people spending hours online – it’s a good attempt at making you take a step back and soberly think about the times we live in.

Sorry this took so long to put out. I blame an enormous lack of motivation, paired with procrastination. But until I blog again, enjoy!