I feel like I’ve gotten a full night’s sleep. But I’ve only actually passed out for about five hours.

I stumble into the bedroom and mumble my thanks to my friends for taking care of me, as well as an apology for being the twit who couldn’t hold her liquor. No worries, they said. Besides, I think to myself, I have, after all, provided them with comic entertainment at my expense.

I’m as slow as molasses getting into the shower. But I feel incrementally better afterwards.

We head out into the wind and sporadic rain to the Tick Tock Diner at W 34th and 8th streets for breakfast before we get down to some serious business of the retail variety.

In the past, the sight of a diner breakfast usually erased all thoughts of hungover queasiness, and I was a new woman by the end of the meal. Of course, the past was when I was in my twenties and had a gastrointestinal system that was practically bionic.

Today is another story. The thought of toast comforts me. The thought of eggs and bacon, however, does not. I make the mistake of ordering scrambled eggs, Canadian bacon (which, by the way, I regret wholeheartedly) and potatoes … and I feel myself turn green when the waitress puts it in front of me.

Shortly after I start picking away at my plate, a wave of nausea hits me and I get up from my table, fast. I make a beeline for the back of the restaurant, only to come across what could only be a HUGE lineup for the bathroom.

This can’t be right, I think. I ask the nearest waitress – who happens to be our server – where the bathroom is. She tells me it’s in the corner … where the lineup is.

“Oh crap,” I mutter aloud, looking around for an alternative. The only thing I can do is go back to my seat, and silently resolve to myself to upchuck outside the restaurant (out of view of my friends) if things REALLY get bad.

But as quickly as it comes, the queasiness passes. Just like that. I start to chew on what I can. Somehow I manage to muster up enough of an appetite to eat most of the eggs and bacon on my plate, along with a second order of toast. (Ah, toast. Sweet buttery saviour …)

(Can I just say it’s WAY smaller than it looks in pictures? How deceiving. I still dig the Prometheus statue, though.)

Our shopping extravanganza starts at J. Crew, where I manage to pick up a nice cable-knit sweater. Next, it’s to Anthropologie, which is a main point of interest for my friend C (who visits the Web site fairly regularly). I think we cover every square inch of that store. Neither of my friends really luck out, but I splurge on a pair of jeans (which, because of the price tag, I will be taking VERY good care of – like they’re the Crown Jewels).

Before we leave the area, we go into the main lobby of the Rockerfeller Center, where we gaze up at the ceiling mural. We’re actually noting out loud about the number of crotches seemingly painted in our direction when I hear a voice say, “Excuse me? Hello?”

It’s the security guard at the front desk, motioning us to come over.

I’m wondering what could we possibly have done wrong, and get C and P’s attention.

As it turns out, the guard gives us an impromptu history lesson, both about the mural painted behind him – Man’s Conquests by Jose Maria Sert – and the story on the ceiling mural (by artist Diego Rivera) , which “moves”, when we follow his instructions. Well … I kinda see what the guard’s talking about as I walk from side to side, but since I still feel hollowed out from the night before, I’m not really getting the full effect.

We leave the area and return to the apartment for a wardrobe change for the next activity on our list: Our big, fancy New York dinner.

We go to Buddakan, this upscale Asian fusion restaurant at 9th a 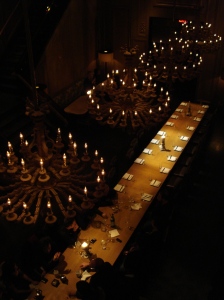 nd W 15th. The outside doesn’t really give too much away, but the inside is fabulous. As I find out the next day, it’s one of a chain of different frou-frou restaurants run by this guy from Philadelphia, and was one of the restaurants used in the Sex and the City movie.

But forget the hype behind the restaurant – we’re there for the food. And – cool, aloof wait staff aside – it’s ridiculously good.

There was this salad … and sea bass wrapped in cabbage which was so good … and this edemame that blew my tastebuds away … and a sweet-and-sour chicken entree I order, which actually resembles a breaded loaf more so than actual chicken. It’s almost too much.

Then the waitress asks us if we want dessert. We’re stuffed, but decide to look at it anyway. I end up going the whole hog and ordering a small chocolate ganache cake, with a dollop of coffee ice cream perched atop some unsweetened cocoa. 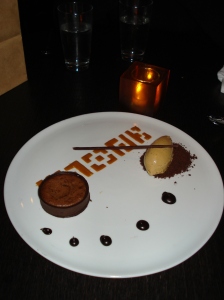 The presentation of the plate is so perfect, I actually feel bad that we’re going to demolish it in a matter of minutes. But it was so warm and so rich, I probably would have left my body, had I not been weighed down with so much food.

Following dinner, we look around for a bit longer, checking out the dining area below and snapping a few pictures before calling it a night.

It’s hard to believe but tomorrow is our last morning and afternoon in town before boarding a plane for home. It’s sad to realize that our four-day adventure is almost over.