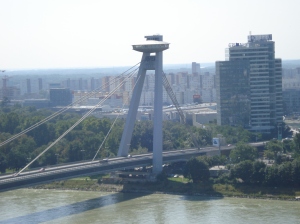 It’s yet another early start on the road, but this time the bus ride isn’t as long. Our group is also smaller. We’ve shrunk by about nine people, my tour roommate Angela being among them – she takes off for Romania first thing in the morning.

Our first destination of the day is a two-hour stop (if that) in Bratislava.

There’s not a whole lot to see in town. The castle’s closed for construction, but we manage to snap some pictures of the nice views. The buildings in the old town are pretty and colourful, as they’ve been in all the places we’ve been so far.

We stop for lunch. Most of us opt for a Konopizza – that’s right, pizza in a cone. (I thought it was something unique to Bratislava. Turns out it’s Italian – I just checked. Hmmph.) Afterwards, in the blazing August heat, we go to one of the squares to buy some souvenirs. I get a cute little plate for my collection back home.

Then it’s pretty much back on the bus and onwards – to Vienna.

Vienna ends up being the city I like the most, which surprises even me. Considering the precedent set by Prague and Budapest, I haven’t held any high expectations. But it steals the show. I can’t quite put my finger on why. It could be because of the beautiful sculptures, and sculpted buildings. It’s CLEAN. It’s just … different. 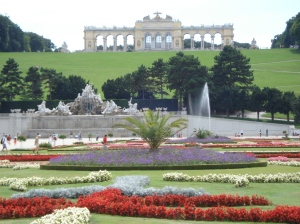 önbrunn Palace. We never enter the palace, but we explore the gardens, which are expansive and absolutely beautiful.

Trimmed lawns. Pretty flowers planted in neat little patterns and hanging off trellises. Lush, green, manicured trees, a lot of which comprise the maze and labyrinth. The sculptures which line the sides. The enormous Neptune Fountain. And at the very top of the park, the Gloriette, which allows tourists a breaktaking view of Vienna from far away. There’s even a zoo towards the back, but we don’t have  enough time to explore it.

Lauren and I snap pictures at the fountain, as well as behind it. We make it as far up as the Gloriette, before we have to turn around and get back to the bus.

When we check into our hotel, we actually get a few hours to ourselves. To chill. Or shower. Or nap. It feels strange, given our crazy schedule so far.

And I really like our hotel. The size of the room’s decent. Even though there is no air-con, there are huge windows. We’re facing the courtyard, so we can see (and hear) some of our tour-mates.  There’s a TV with an actual remote. The size of the bathroom is decent. And if you have any questions, you can ask the staff, because they’re bilingual. AND they’re NICE.

If I had any qualms about spending money in Vienna because of the expense, they have dissipated. Given all the currencies and mental conversions I’ve dealt with in the past week, I don’t care. I’m just happy to be dealing with money I understand.

We have a very nice dinner in the dining room. Then our tour guide Carla proposes the outing for the evening: a trip to Prater Amusement Park.

In my currently relaxed state, I’m not exactly keen on the idea. Because who travels 6000 kilometres away from home to go to an amusement park?

But it’s actually quite fun once we get there! I ride the Reisenrad (which is essentially an old Ferris wheel, or wooden, 110-year-old version of the London Eye, whichever descriptor you prefer), the swings, and this crazy gravitational ride called “Extasy” which plays loud German dance music and whips you around and upside down for about three minutes. I don’t have whiplash, but the ride is enough to scramble my brain. And on inspecting myself the next day, I think the ride may have caused some temporary marks on my skin. I have a very red, thumb-size bruise under my arm, just behind my armpit that lasts for several days (I think it was there for about a week!).

But back to the hotel to wind down and get some shut-eye. A full day of Vienna – including a classical music concert – awaits.